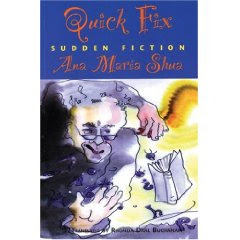 Quick Fix: Sudden Fiction plays home to four of Argentina-born Ana Maria Shua’s fiction collections. These whirlwind fictions are so intoxicating that readers will find themselves rereading a piece half a dozen times before moving on to the next. Readers have to stay on their toes if they hope to keep up with this writer’s winking prose. These sudden fictions, as Shua calls them, take on faerie tales, perceptions of reality, and familiar stories and give them nice injection of sass, feminism, and snark. Here, the sudden fictions ask the reader to take a new look at old stories.

Shua’s work pokes holes through former patriarchal visions of women. The work in this collection retells the stories or takes a stab at redefining such women as geisha and Sleeping Beauty. In “#176,” Shua allows the Sleeping Beauty to take control of this sleep, to use it as a weapon to secure her freedom. Shua writes:

“Sleeping Beauty slept for one hundred years. She took one year to stretch after her prince’s passionate kiss. She took two years to get dressed and five to eat breakfast. Her royal husband put up with all this without complaining until that dreaded moment when, after fourteen years of lunch, it was time for a nap.”

When the princess wakes, she takes her time and grabs control of her waking hours. The sleep that “protected” her in the past is the sleep her husband grows to fear. Here, Shua shows the reader that such modes of control backfire. This Sleeping Beauty will take as long as she wants to dress and have lunch, and she will then return to sleep rather than lead a life of servitude.

The Geisha section is full of sly commentary on men and their objectification of women. The world of geishas has notoriously been a world where women serve men. Shua roasts the men who participate in such a culture. She takes on “neat freak” who takes forever to remove his clothes only to ask for a different woman, and in “Sophistication” Shua shows the hypocrisy and irony of the sex industry when a man asks for “the services of his own wife.” The poem takes on the sex industry and cracks its shell to show its most ridiculous parts.

In one of the more moving sections of the geisha-focused poems, Shua examines the idea behind a man's "dream girl." Shua writes in "The Girl Who It Not Here":

"None is more successful than The Girl Who Is Not Here. Although still young, many years of dedicated practice have allowed her to perfect the very subtle art of absence. Those who request her end up settling for another, whom they possess with indifference, trying to imagine that they hold in their arms the best, the only, The Girl Who Is Not Here.”

It’s poems like this that startle the reader and causes him or her to sit up straight and consider the world. Here, the man can never be satisfied by what is there. He is always looking for something else, something unattainable. Shua paints fantasy as absence, as the unattainable.

The strongest of Shua’s sudden fictions are those that take well-known characters and situations and spin them to create new tales. Instead of work that warns women or seeks to keep women locked away, Shua gives women their power back.. These fictions are shadows of the original or inverse or continuation of what once was. Shua rewrites history in #84:

“The real value of Scheherazade’s tales did not rest on their intrigue, but rather just the opposite, on their hypnotic monotony. Thanks to her extremely boring stories, she was the only of the sultan’s many wives who succeeded in making him fall asleep each night. Sheltered from the tortures of insomnia, the sultan rewarded Scheherazade with the greatest of all prizes: her own life. The stories of that collection, which is known as The Arabian Nights, and which, truth be told, are not totally lacking in interest, were created many years later by the sultan’s little sister, the beautiful Dunyazard, to entertain her royal nieces and nephews.”

Shua is well aware of the way history has treated women, and in this piece, she takes back history and reinvents it in favor of women. The sultan is shown to be a fool: one who sleeps when timeless stories are spun right before him. The women become the writers of the classics; the women become the people to pass these stories on to teach one another. This piece and others in the collection ask the reader to reconsider the canon, its authors, and the way history has been written.

There are times where the idea behind the sudden fictions seems to overshadow the actual language used to convey them. This could be the result of translation, or it could be that Shua wants her points to come across bluntly and clearly. The effect is sometimes a preachy or bluntness that seems too loudly chuckle at its intelligence. Though the idea is interesting, “To Each His Own” is almost too loud and too proud of its metaphors. The sly wink that has been present throughout the anthology is momentarily replaced by a lard thigh-slapping guffaw. In this sudden fiction, Shua plays on the animalistic side of the sex industry when describing vampire clients. Shua writes: “For sweet-toothed vampires: fat, listless, diabetic women with Modigliani necks….” The implications are clear: the men are sucking the life from women to fulfill their desires. The metaphor is almost too easy or loud for the collection. To refer to men who objectify women as blood-suckers seems not only as if it has been done before, but seems as if it’s been done so often that it’s become a cliché.

Shua’s writing is crisp, and her voice is loud. This writer doesn’t shy away from difficult decisions. The core Shua’s work is to provide women the chance to speak and the chance to take back their lives and stories. What would the world be like if our fairy tales were as sharp and women-centered as these pieces? It’s easy to picture a new reality by the end of the anthology, a world full of humor lined with barbed wire, a world where women make their way to the table. This is Shua’s greatest joke: these pieces are neither fictions nor sudden. Irony of ironies, it’s plain to see that nothing in this anthology can be solved or seen as a quick fix: not the fictions, not the extensive histories behind these fictions, and certainly not the revision of history.

Posted by forthgone at 6:24 PM